An evil demoness founded a cult dedicated to exploring evil in its most elemental forms. This cult was based in a temple just outside the village of Hommlet in a vile shire known as Nulb. Soon, this cult rose to rule the region with tyranny and grim times of chaos and violence ensued.

The Temple of Elemental Evil is an adventure module for the fantasyrole-playing game Dungeons & Dragons, set in the game's World of Greyhawkcampaign setting. The module was published by TSR, Inc. in 1985 for the first edition Advanced Dungeons & Dragons rules. It was written by Gary Gygax and Frank Mentzer, and is an expansion of an earlier Gygax module, The Village of Hommlet (TSR, 1979).[1]The Temple of Elemental Evil is also the title of a related 2001 Thomas M. Reid novel and an Atari computer game, and the term is used by fans of the setting to refer to the fictional Temple itself.

In the module T1 The Village of Hommlet, the player characters must defeat the raiders in a nearby fort, and thereafter Hommlet can be used as a base for the party's subsequent adventures.[1] The adventure begins in the eponymous village of Hommlet, situated near the site of a past battle against evil forces operating from the Temple. The adventurers travel through Hommlet and are drawn into a web of conspiracy and deception.

The module is recommended for first-level characters, who begin the adventure 'weary, weak, and practically void of money'.[3] They travel to a town that is supposed to be a great place to earn fortunes, defeat enemy creatures, but also to lose one's life. While the town initially appears warm and hospitable, the characters soon learn that many of its inhabitants are powerful spies for minions of evil.[3]

The T1 adventure stands alone, but also forms the first part of T1–4. In The Temple of Elemental Evil, the characters start off at low level, and after establishing themselves in Hommlet, they gradually work their way through the immense dungeons beneath the Temple, thereby gaining experience.[1] T1 culminates in a ruined moathouse where agents secretly plan to re-enter the Temple and free the demoness Zuggtmoy, imprisoned therein. The Village of Hommlet module has been described as a beginner's scenario, which starts in the village, and leads to a nearby dungeon, while The Temple of Elemental Evil continues the adventure.[4] In the next section, T2, the adventurers move on to the nearby village of Nulb to confront several nefarious opponents, including agents from the Temple. Based on the outcome of these encounters, the player characters can then enter the Temple itself to interact with its many denizens and test their mettle against Zuggtmoy herself.

The temple referenced in the module's title is an unholy structure located in the central Flanaess not far from the city-state of Verbobonc. In 566 CY, forces of evil from Dyvers or the Wild Coast constructed a small chapel outside the nearby village of Nulb. The chapel was quickly built into a stone temple from which bandits and evil humanoids began to operate with increasing frequency.

In 569 CY, a combined force was sent to destroy the Temple and put an end to the marauding. This allied army clashed with a horde of evil men and humanoids, including orcs, ogres and gnolls, at the Battle of Emridy Meadows. Men-at-arms from Furyondy and Veluna united with dwarves from the Lortmils, gnomes from the Kron Hills, and an army of elven archers to face the threat of the Horde of Elemental Evil, consisting largely of savage humanoids such as orcs, ogres, and gnolls. The arrival of the elves from the shadows of the Gnarley Forest turned the tide of battle, trapping the savage humanoids against a bend in the Velverdyva where they were routed and slaughtered.

At some point in this battle, Serten, cleric of Saint Cuthbert and member of the Citadel of Eight, was slain. The Citadel was notable for its absence at this pivotal moment in the history of the Flanaess, and their failure to take part in the Battle of Emridy Meadows contributed to the group's decline and eventual disbandment.

The site itself remained, however, and over the following decade rumors of evil presence there persisted. The Viscount of Verbobonc and the Archcleric of Veluna became increasingly concerned, and cooperated to build a small castle outside the Village of Hommlet to guard against the possibility of the Temple rising again.

For the next five years, Hommlet gained in wealth thanks to adventurers who came to the area seeking out remnants of evil to slay. Things quieted down for another four years as the area returned to peace and normalcy, but in 578 CY evil began to stir again, with groups of bandits riding the roads. In 579 CY, the events in the T1–4 module occur.

Return to the Temple of Elemental Evil is set 12 years later, in 591 CY. 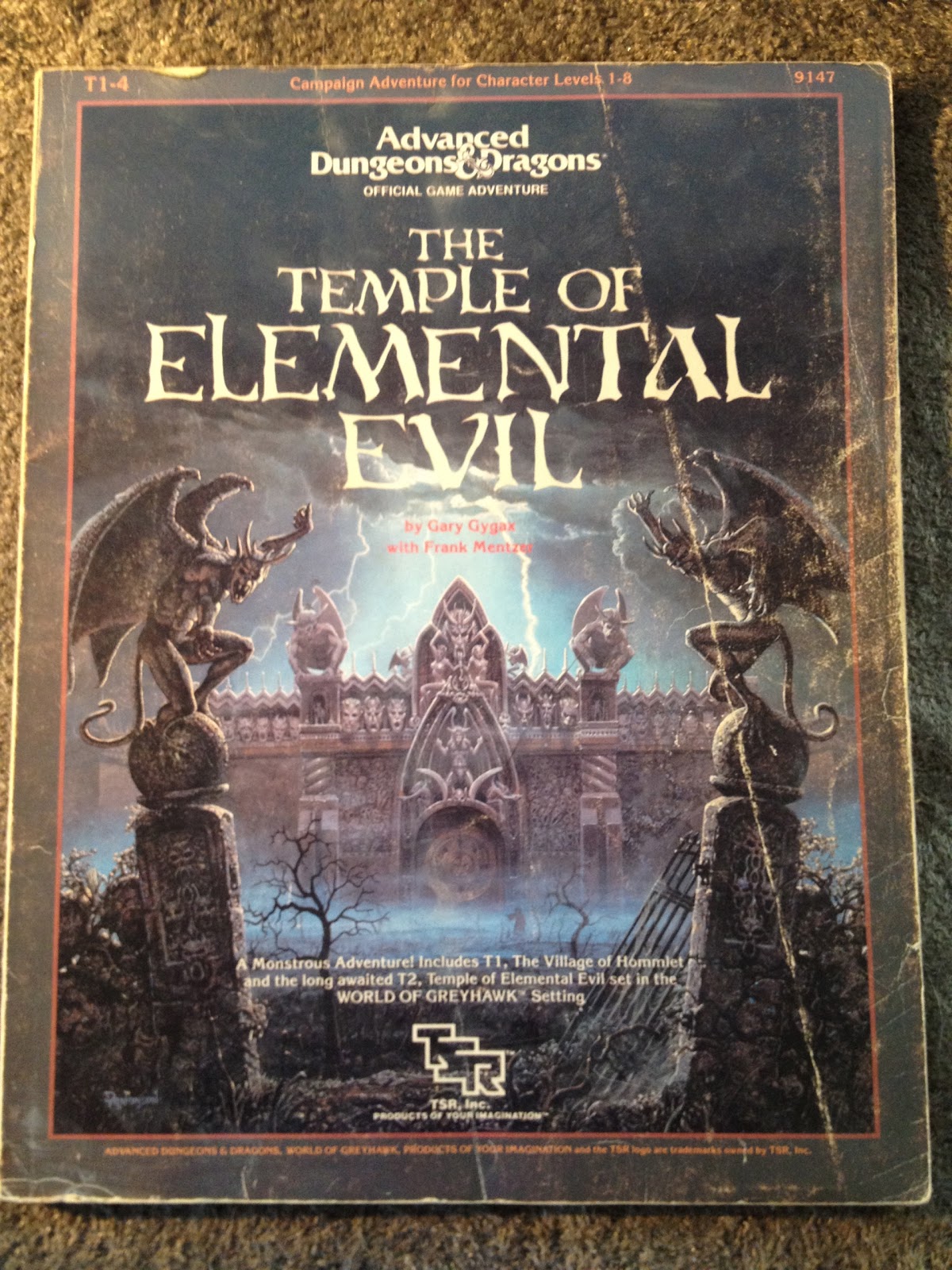 The adventure module The Village of Hommlet was a 24-page booklet designed by Gary Gygax, and published by TSR in 1979.[3] The original printing featured an outer folder and a two-color cover; the book was reprinted in 1981 with a color cover.[1]The Temple of Elemental Evil was originally intended to bear the module code T2 and serve as a true sequel to The Village of Hommlet. Gygax began writing T2 soon after the publication of T1, but often stopped to work on other products, such as The Lost Caverns of Tsojcanth (Gygax 1981). The T2 version was never completed, and no module bearing the codes T3 or T4 was ever independently published. Instead, the material for the sequel was combined in 1985 with the original T1 storyline and published as an integrated adventure bearing the module code T1-4.

T1-4 The Temple of Elemental Evil was written by Gary Gygax with Frank Mentzer, and published by TSR in 1985, incorporating T1 The Village of Hommlet.[1] The module was a 128-page book with a 16-page map booklet, and featured a cover by Keith Parkinson and interior illustrations by Jeff Butler, Clyde Caldwell, Jeff Easley, Larry Elmore, and Dave Trampier.[1] The module includes descriptions of two towns, the Temple itself, and four large dungeon levels.[1]

Although initially written as a stand-alone series, T1-4 was made to dovetail into A1-4 Scourge of the Slave Lords when these two campaigns were revised in 1986 as supermodules. The combined campaign then culminates with the GDQ series, incorporating modules G1-G3 Against the Giants; D1-D3, which introduced D&D fans to drow elves for the first time; and finally Q1, Queen of the Demonweb Pits, in which the heroes fight against the spider demon Lolth herself. These last adventures were also combined and republished as a supermodule bearing the code GDQ1-7, Queen of the Spiders.

In 2001, Wizards of the Coast published a novel by Thomas M. Reid also bearing the title The Temple of Elemental Evil.[5]

Wizards of the Coast also published a sequel to the T1-4 adventure in 2001, the 3rd Edition module Return to the Temple of Elemental Evil.

Wizards of the Coast published a remake of The Village of Hommlet adventure for Dungeons & Dragons 4th Edition and released it through the RPGA.[citation needed]

Kirby T. Griffis reviewed The Village of Hommlet in 1981, in The Space Gamer #35.[3] Griffis found it a very playable module, noting that the module could be very fun if run by a good DM. Griffis commented: 'Players 'get into' their roles, the thieves stealing from the revellers at the inn, the fighters getting drunk under the table.'[3] He also found the map to be well-keyed, and noted that important buildings have floor plans mapped out. Commenting on the imbalance of power, he noted that 'some of the evil spies are entirely too powerful for the party to tackle, and the local high level good characters are hardly ever interested in aiding the adventurers.'[3] Overall, Griffis found The Village of Hommlet to be a very good introductory adventure, and recommended it as an introduction to D&D.[3]

Dungeon Master for Dummies listed The Temple of Elemental Evil as one of the ten best classic adventures, calling it 'the grandfather of all huge dungeon crawls'.[6]

Lawrence Schick, in his 1991 book Heroic Worlds, says of The Temple of Elemental Evil, 'If you like huge classic dungeon crawls, this is probably the best of the lot.'[1]

The original drawing of the cover art for the Burzum albums Burzum, Det Som Engang Var, and From the Depths of Darkness are all inspired by the art for The Temple of Elemental Evil.[7][8]

In 2003 a computer game, The Temple of Elemental Evil, based on the original T1-4 module was released. It was developed by Troika Games and published by Atari. It remains the only D&D related computer game set in the original Greyhawk setting.[9]